This past spring I attended my first Vipassana retreat.  Four nights, five days in noble silence amidst Pinon, Scrub Oak, red sandstone cliffs and sacred grounds.  It would prove to be time very well spent on numerous levels first and foremost in terms of how a deeper level of self-awareness might lead to increased intimacy with those subject I am most drawn too.  Flowers.

I had not photographed for several months prior and I had vowed that I would not photograph the flowers of early spring until after the retreat which was the end of April.  It was an experiment to see what if any impact this kind of intense meditational experience might conjur up in my artistic processes and/or visions.  Since I had not picked up and handled my camera for some time I knew I was going to be rusty and clumsy working with it again.  And sure enough I was when out for the first time again, I had forgotten which dial did what.  It was a small but necessary reminder that often a first lesson upon setting out to photograph is to re-remember that from moment to moment or season to season, each time one picks up their camera with an intent to faithfully use it, one starts in Beginner’s Mind.  In effect, one simply starts over.

Beginner’s Mind is not some mystical or deep mind state.   It’s a state within the mind, a mind-state that we have all experienced many times.  For example, recall the excitement, curiosity and sense of freedom you experience each time you draw the viewfinder to your eye and for just an instant you are absorbed in the myriad possibilities, compositions, colors, etc existing in that space and time.  This initial energy and curiosity – this just seeing – not thinking – is Beginner’s Mind.

The practice of photography is uniquely suited to cultivating this form of perception and contemplation because as I have discussed in a previous post, photography tugs at our natural curiosity and the more we photograph the more curious we become in relationship with world, self and others.    As one allows themselves to see with new eyes, they will inevitably start to see the joy and wonderment of this world; experience the preciousness of life and each moment of living.  In time, one’s life begins to change and I suspect it does so in more wise ways.  It has and is for me.  Can I give a witness…..

As my practice of Beginner’s Mind has deepened some curious things have begun to occur.  For starters, there is a shift or perhaps a twist that occurs in the way I general  experience and relate to Time.  The feel of Time has become fluid.   Time seems no longer constrained or restrained by being reduced to increments of measurements and devices that “tell” time or “mark” time such as a watch or a shutter speed.  Time, when one is concentrating on a constantly changing, living subject framed in the lens; stretches to encompass the task at hand.  As Minor White observed:  “no matter the film speed Spirit stands still long enough for the photographer It has chosen.”

Iif  photography is about anything it is about noticing – about perceiving and selecting and perceiving again the visual dance of life emerging moment by moment before our eye’s and right in front of our cameras.   Since starting to intentionally apply Buddhist concepts of Mindfulness or bare attention – to my photography I am experiencing that my abilities to concentrate, to experience time and movement as stillness and silence has grown.   When I fall into this state of mind (the flow) or consciously open to it as a natural result of cultivating and practicing accessing levels of Beginner’s Mind that there is an increased liklihood of  receiving / creating beautiful images.

Almost all the floral images I created this season were in-camera multiple exposed frames.  For those who have not yet played with multiple exposures and creating images in this way, some how-to information will be of help but the only way to really use this technique is to play with it.  Repeatedly.

I advise frequent playing around with creating images of multiple exposures because when you do this you introduce the element of time – the passing of time – into the image stream.  Each image then becomes truely if minutely unique because some increment of time will have ensued between the first and last exposure.  For example, picture a tree, a beautiful, stately tree in its Autumn prime.  Feel the cool fall breeze on your face, hear it  rustling the leaves.  You compose what is pleasing with the camera and then you push the shutter and hold it while multiple exposures occur.  There is no way to know beforehand how the camera will have captured the reality of that tree through the span of ? exposures.

As you play with this technique, you will discover that a side effect is that color shifts occur and  the capture-ability of light and its effects are also altered.  Again, there seems no rhyme or reason to these effects – certainly none that I have had any success replicating more than the law of average would suggest.  Nope.  When you work with multiple exposures you introduce the diminsion of time and images may reflect the flow of time and reveal previously unseen data.

If you happen to be using this technique on still life work as I am than you will also discover that there is a registration tolerance – a zone of good enough focus – that you can play around with.  If you have done any macro work you know that depth of field is miniscule at these levels of magnification, a way around this is faster shutter speeds. Using the fastest shutter speed you can is highly recommended regardless of if you are using a tripod or not. 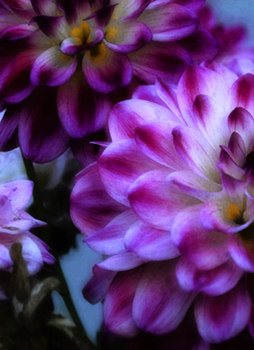 Since these images are captured differently than other images, the processing likewise requires one to apply the same principles of Beginner’s Mind to the creative utilization of Photoshop and/or other image manipulating software.  As Robert Henri, a well quoted 18th Century painter is credited with having said:  “The artist finds or creates the technique (s) which give reality to their vision.”