“……….OK have fun and go have some mindful photography,” the wife called out as I grabbed the tripod and camera bag and headed out the door…..Back to Blue Lake today back to my get away time, my refuge time, my time to exist in another world then the one my partner and I are currently co-inhabiting with our neighbor and his unflagging defiance and boy does time fly.

Upon entering the patio / porch / and registration office I saw  blue Astor’s waving in a light breeze and the sun flickering down through the leafy branches glowing alight here and there all so unpredictably so upon the yellow caps of the flowers laid against a sea of blue and green all waving about and seemingly laughing!   For just a second I perceived the light has totally magical. Lil Bob (3 yr old in side) perceiving as a child might seeing such things as blue flowers for the very first time….and then with the click of a shutter that magic glow faded and a new burst of light exploded somewhere else. 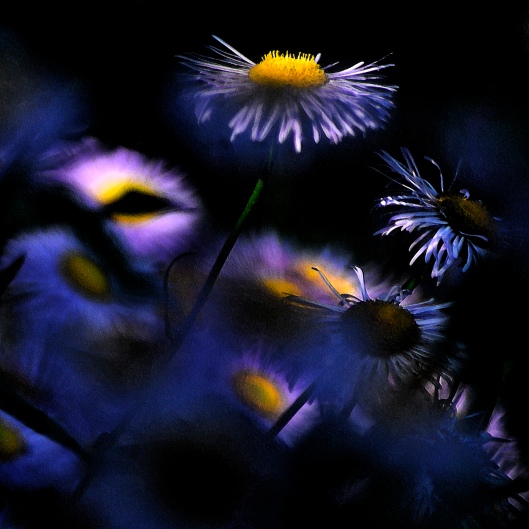 I took a walk to settle my mind and to ease my sense of time into the time of the space around me……slow and peaceful.  No rush.  Everything calm just as it is and then I saw this and it caught my eye.  I took an image or two then my attention  was briefly called away and in the wink of an eye the sun went behind a cloud and the image wasn’t what it had been and was only a memory now.

I sat in a new spot not far from a few aging and dying Columbines where the light caught my fancy and I played with pastels and splashes of light and blocks of darkness as part of the compositional balance created by a withered Columbine and seen with the eyes of a child.  This image below, came into focus and after I’d taken it as always, I checked the capture. When I looked back at the flower that had just been a patient subject, it was gone. It lost its hold on life and tumbled down to the ground.  I was the last awakened energy to observe its passing.  An honor worthy of a bow at the very least.

I sat in some shade re-playing all the hits of the day – scrolling through images observed and I came to the one that had stood out the strongest and I paused to admire it and then totally unforeseen I fumbled with the camera and deleted it.   For a second I experienced a sting of remorse “OH NO!” It slowly faded. I would survive.  Stuff happens.  It ain’t all or just about me.  Shit happens. Flowers fade.  This life will fade.  My desire is that my heart will continue to glow and grow as this form called Body declines and decays till one moment I fall off the vine too – into the earth where equanimity is grounded.